At 11am on 11 November 1918, World War I ended.  President Wilson set aside November 11 as a national holiday, Armistice Day.  In 1954, it was changed to Veteran’s Day to honor all who have served in the American military.

My father, Vincent Profy was a veteran of WWII.  Today, Veterans Day 2015, I realize how very little I know about his time in the service.

He was at a soda fountain in a Mill Street Drug store ( I think Pall Mall but maybe Levinson’s) on December 7, 1941 when he heard the news about  Pearl Harbor.  He was 20 years old.  I’m not sure but he may have been working for Rohm Haas at this time before going into business with his father. 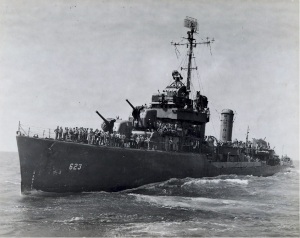 He enlisted in Navy in New York on July 31, 1942.  In early March he was aboard the USS Nelson (DD-623).  On the 31st he was transferred to the USNH in Brooklyn for treatment.  The Nelson was a destroyer.  In January 1943 after a shakedown cruise, she reported to the U.S. Atlantic Fleet.  The Nelson took part in the invasion of Sicily (1943) and the Invasion of Normandy (1944).   If Father had remained on the Nelson , he would have had a totally different wartime experience. He would not have been happy.

On March 24, 1943 he reported to Norfolk, VA for duty on the USS Rapidan.  His service number was 706-20 15.  On the crew list above his name was Leonard Palmer from Boston. He mentioned Palmer quite a few times; the only other name I remember was “Weymouth?” The Rapidan sailed on April 28.  His rating was MM2c (Machinist Mate 2nd class).  He was also identified as V-6 (General Services and Specialist.)

Much of the above is from Ancestry.com  rather than something I heard from father.  He never gave much detail about his service time and sadly I didn’t ask questions.

The USS Rapidan (AO-18) was built in 1919 in Newport News, VA.  She was an oil transport.  She was decommissioned in 1922 after the end of WWI and until January 1940 when she was called back into service.  In the early part of the war, the Rapidan moved oil along the Atlantic coast.  In April 1943, she headed to the Meditterranean, arriving at Gibraltar 24 May. She discharged her cargo in Oran and then returned to the United States.  It would seem that Father was aboard for this run.

He told told us that he worked in the engine room — specifically desalinating water.  It was hot and dirty.  The Rapidan continued to operate in the Atlantic until March, 1944 when she was ordered to the Pacific.  Through the Panama Canal on March 19, she steamed up to Seattle. The Pacific and Seattle intrigued my father.  When he spoke about being aboard ship, it was always in the Pacific.  Shore leave in Seattle separated the beer guys from the ice cream boys.  My father was one of the latter. In the Pacific, the  Rapidan carried oil to Alaska, Kodiak, Cold Harbor, Dutch Harbor and Aleutians ports.  I remember his mentioning the Alaska and the Aleutians.

He wasn’t very fond of his years in the Navy and that may have contributed to his reluctance to talk about it.  My mother wanted to go to Alaska but he would have nothing to do with the trip.  He’d seen enough during the war. She went with friends.

After father was discharged on December 9, 1945, the Rapidan remained in the Pacific until June 1946, decommissioned September 1946.  In 1947 she was sold for scrap.

There are several pictures of my father’s service time.  On line you can find pictures of the Nelson and Rapidan.  Although there is mention of crew reunions online, there isn’t a lot of names or information.  For his 90 birthday, Vicky tracked down a Rapidan club and got a few shipmates to sent him a birthday card.  He was unimpressed, “Don’t they have anything better to do?” Wish we knew more.