“The Greatest Generation” was a tribute to the generation was born in the depression and came of age during World War II.  It was written by Tom Brokaw and published in 2001. Earlier this week I began to read “The Greatest Generation Speaks: letters and reflections.”   In it Brokaw shares responses and letters from veterans and their families to his best selling   book.

I chose it from the short pile of books I’m ready to read or re-read.  I chose it to escape the feeling of miasma I have following the recent election. Weeks before the election I wrote a blog, “Trump:  I’m Tired.” And I’ve written about the seesaw feeling of wanting to never hear Trump’s name again and recognizing that in just a week he’s making appointments that could drastically, dangerously change the United States. I cannot close my eyes.

The Greatest Generation is my parents Generation.  Their story is probably pretty typical.  This Veteran’s Day I re-posted an article about my father who served in the Navy during WWII.  Yesterday in the mail, I received several documents about his service from the Department of Veterans Affairs and a notice that have forwarded my request to another agency, National Personnel Records.   The papers, “Notice to Separation from U.S. Naval Service” confirmed his service at Newport and the Great Lakes, on the U.S.S. Nelson and the U.S.S. Rapidan.  Enjoyed reading that he listed watch making as his preference for training and job.

These small windows into Fathers life are so important now.  He is gone and the record of his service is incomplete.  It’s only recently I realized how little he said about his years in the military.  That was not unusual among servicemen.  Most, like Vincent Profy, were humble, quiet about their sacrifice and courage.  Maybe they repeated a few favorite stories but not too much.  Brokaw’s book actually awakened memories for many.  How different today when we “shout out” our accomplishments or concerns on Facebook and Twitter.

Another lesson we can learn from the Greatest Generation is unity.  After Pearl Harbor, most Americans were united in a determination to defeat Nazi Germany.  There was a draft but thousands enlisted to protect American values — acceptance, freedom, democratic rule.  You can add to the list.  The unity extended to the men in the foxhole,  cramped in a submarine or flying over enemy territory. At home, young girls and recently married helped keep the home fires burning.  Sounds corny, but it’s true.  They worked in factories, raised kids,   established canteens for those in uniform.  They were brothers and sisters for the duration.  In contrast, our rhetoric today about coming together sounds hallow.

Maybe this was when “America was Great.” I’ve been searching for that period — turn of the nineteenth century, 1840s Oregon Trail, see previous blogs.    But there were some cracks in the WWII years.   African Americans faced discrimination in the military as well as at home.  Women were sometimes viewed as just”pin ups.”  Japanese Americans were herded into concentration camps at the same time second generation  Italian immigrants invaded the homeland.  Gays were in the closet and couldn’t openly serve in the military.  When it’s said “Make America Great Again.”  Is this what is meant?

I totally enjoyed escaping into the world of “The Greatest Generation Speaks.”  Like religion, it was a haven, security, warm, cozy, things were simpler then.  But it’s history; we can’t go back.  Can we learn something.

I totally respect and appreciate the humility, hard work ethic, loyalty, patriotism, and family values that characterized the greatest generation, including my Father and Mother.  I accept that their attitudes toward diversity and openness were sometimes less than they instilled in me.  Father had Black friends but held subtle racial stereotypes.  I fondly remember a day in center city Philadelphia when he realized we were part of  a gay parade, he literally turned and ran away.  Interesting, Mother despite or because of her devout Catholicism was a more open. 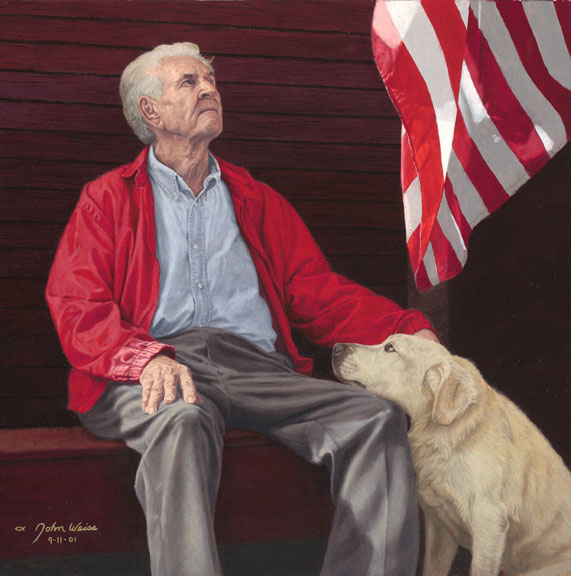 Reading, hearing, thinking about the stories of my parent’s generation,  friends and neighbors, is both inspiring and questioning.  Sixty million people were killed in WW II.  Four hundred thousand were Americans.  Why?  Easy answer.  Hitler.   A leader who divided people and scapegoated —  the Jews, gypsies, homosexuals and . . .  . are responsible for your troubles.  A nationalist who proclaimed you are superior to others.  A demagogue  who institutionalize bigotry and racism.

If you are a 60s liberal like me and want to understand the Greatest Generation better, read ” Duty: a father, his son, and the man who won the war.”  Bob Greene never fully understood his father.  After his death he met Paul Tibbits, the pilot of the Enola Gay, who dropped the bomb on Hiroshima.  How could his father admire Tibbits who killed some many people with such a horrible weapon.  Greene meets and talks with Tibbits many times and slowly comes to understand his father, Tibbits and the Greatest Generation.  It’s quite a story, I remember after reading it, immediately passed it on the my father.  Maybe no gereration holds the keys to the kingdom.

I don’t think we are Nazi Germany.  At the same time I can’t smile and promote “return to normal.”  The Greatest Generation, my parents,  raised me to think, proudly,  for myself.  Whether they intended to or not, they taught me to defend American values, including diversity, immigration, religious freedom (all religions), women’s rights — we are brothers and sisters united.  Black and white, male and female, Muslim, Jewish and Christian, gay and straight.

I honestly believe in the end, my parents, the Greatest Generation,  would have supported that unity.  It’s what they taught me.