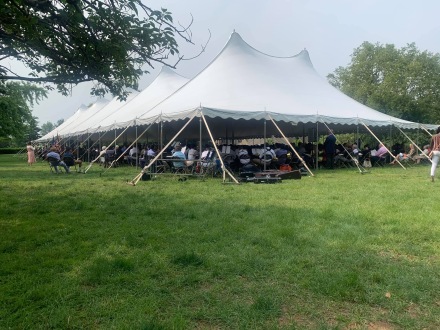 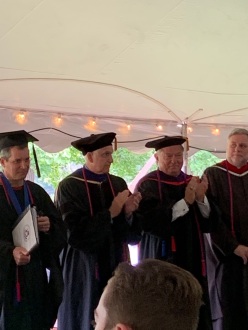 June 1, 2019, 10 a.m.  I am in academic robes sitting on a small stage under a large tent.  I am attending yet another Holy Ghost Prep graduation.  I thought my last was 2014 when I retired.  But about a month ago HGP president and 1979 alumnus Greg Geruson contacted me. I had been chosen to receive the Fr. James McCloskey Alumni Award given to an “alumnus whose profound generosity, commitment, and support demonstrates a unique understanding of the mission of Holy Ghost Prep.”  My first response was to question whether I was appropriate, the typical chosen alumnus.  He responded that yes, many who received the award were trustees/donors (Quinlan, Guarrieri, Geonnotti, Naccarato, Holt) as I suggested but there were others whose contributions were more educational.  In fact five taught at HGP (McCloskey, Buettler, Mundy, Duaime, Chapman).  I was honored and accepted.

Saturday’s  weather was perfect, sunny but not too hot.  There have been the graduation years of sweltering heat or massive thunder storms.  Graduation this year was the (take a bow Ryan Abramson ‘94) a smooth, well-orchestrated event with many traditions and awards.  Diane, Jenny and granddaughter Viv were given a royal tour and special seats by Greg Geruson’s Assistant. They enjoyed the ceremony.

While students milled about the cafeteria; faculty lined in in the main hallway.  I got into my academic garb and hung out in Geruson’s office.  There were quite a few alumni from 1969 celebrating their 50th anniversary.  I got talking to one I recognized but thought I was talking to the son, a former student when I was actually talking to his father.  I won’t mention any name but the son operates a great brewery in Ambler.  I spoke quite a bit with Greg Nowack ‘77 who would address the class of 2019.  When the graduates names were read, I recognized several family names.  Got to talk to at least one after the ceremony.  HGP is family on many levels.

Greg Geruson was joined by Ken Lorence ‘05 from the Alumni Association for the presentation of my award.  Ken took my Local History course and told me he follows my blog, reading about my current local history reads and explores.  Teachers always like positive alumni feedback.  I thought Greg Geruson provided an exceptional summary of my contribution to HGP.  He grounded my educational philosophy and style, “hands-on, experiential learning” on my Peace Corps teacher training in Bisbee, AZ in 1969 (a 50 year anniversary).  I returned to HGP as a librarian, English teacher in 1973.  He explained that in 1978 I was appointed Assistant Headmaster (one of the first lay administrators).  Later in the day Fr. Jeff Duaime ‘76 recalled my close friendship and relationship with Headmaster Fr. Jim McNally, my mentor and boss for about 10 years.

Greg also highlighted the best of my teaching at HGP.  There was my signature Local History course with several field trips.  A 10 year involvement with Ted Hershberg’s University of Pennsylvania High School Partnership where one of my classes partnered with a Philadelphia public school class, crossing the urban-suburban divide and jointly working on a neighborhood community service project.  And then there was Ayudanica, a service project to Nicaragua founded by Rob Buscaglia.  We took mostly HGP but others to create a small community library and computer center in the village of Monte Rosa.  As Greg commented, “Both the Penn program and Ayudanica were model programs and represented returns to Vince’s Peace Corps Roots.” Greg correctly described me as a teacher and librarian at heart, positions I returned to after completing a doctorate at Temple University.  Positions I held until retirement in 2014.

Spending 4 hours on the HGP campus on graduation Saturday was a pleasant reunion for me.  Windows to the past were opened and I found many “memories in the corners of my mind.”  Although I got to speak with some faculty and staff, it was too brief.  I counted about 27 from my days at HGP.  There were also quite a few new faces. At least two people said to me how much HGP had changed — in the past five years since retirement; in the fifty-four since I graduated.  Sure there have been lots of changes, new buildings, new technologies, new initiatives. 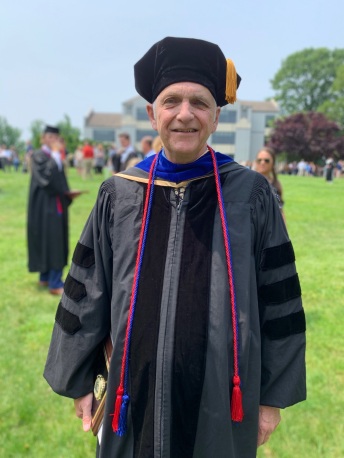 But as I listened and walked around I found so many things have remained the same.  Is the mission of HGP different today than it was in the 1960s when I was a student?  Is the need for the fundamentals of reading, writing, and arithmetic the same?  Is the  critical thinking and ceremony that Greg Nowack spoke about any different?  Do we still hope students develop a attitude of life long learning and service to others?  Do we want alumni who think independently and stand up for their beliefs? Do we teach the value of diversity and equality?

The new science labs are great and should facilitate student learning opportunities.  But I  still remember fondly the closets of hand me down test tubes and other science glassware, dusty bottles of chemicals, bottled biological specimens, bones and stones that made up our chem and bio labs in 1965.  Fr. Leo Kettle used them to instill a curiosity and respect for science and the natural world.  As much as I like and use computer technology, I have a librarian’s love of books; reading books. I remember Fr. Marshall’s semester of American literature that led to my college major and Fr. Meehan’s  advice to journal every day.

Change is good but so is tradition. Hopefully HGP will continue to be cutting edge. And I hope the past is treasured and preserved. 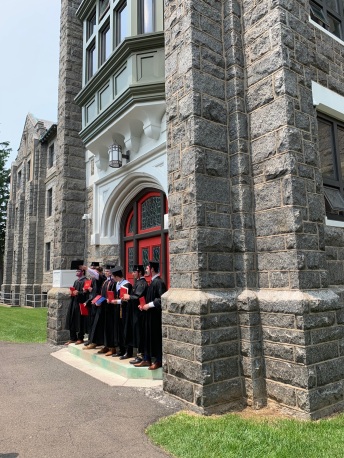 I didn’t get an opportunity to speak to the graduates.  But I have a short bit of advice that sums up my educational philosophy.  It’s attributed to Mark Twain : “Don’t let schooling interfere with your education.”  If any of the 2019 graduates (or alumni) read this and don’t understand, I’m available most days along the Delaware Canal in Yardley.  Stop by.