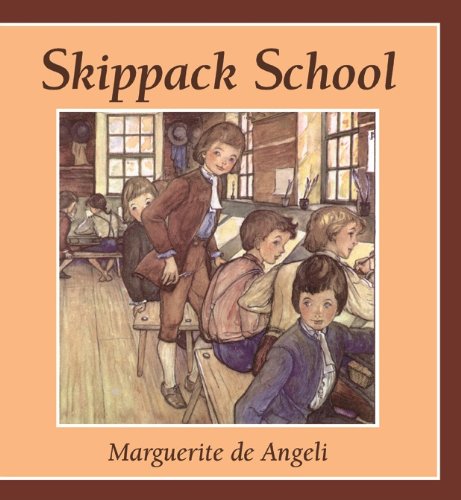 I can’t resist buying local history books.  If they are for children, all the better.  A few years back I discovered  “Skippack School” by Marguerite de Angeli.  The author- illustrator of several dozen books lived and died in the Philadelphia area.  “Skippack School” is Eli’s story.  As a young German Memonnite, he moves with his family to a farm outside of German Town, Philadelphia on the Skippack Creek.  Family and neighbors help construct the family’s log house.  Within months, crops, cows, chickens, pigs; they have a working farm.  And Eli has responsibilities.

There is a lot of detail about Colonial life in “Skippack School” — spider cooking pots like we recently used in Deerfield’s Open Hearth cooking class; split cedar shingles similar to those I made in Montpelier two years ago; processing flax into linen for clothing cloth.  There are references to local foods – cornbread, wild turkey, sauerkraut, and soft pretzels. Settled in, Eli begins to construct a bench with elaborate carvings for his mother.  But it’s also time for school.

Eli goes it’s to, well it’s the book’s title, Skippack School.  It is run by the Mennonite Christopher Dock.  In the 1970s, when I began teaching at Holy Ghost Prep, we played basketball against Christopher Dock, it had emerged into a local Prep school.  Eli was surprised that Master Christopher applied the rod much less than his German teachers.  At the same time he was more interested in creating things and being outdoors than classroom learning.  This could lead to trouble.

“Skippack School” references the Leni Lenape, local Indians treated fairly by William Penn.  Eli will take a trip to German Town with its market, shops, Meetinghouse, the Green Tree Inn, Rittenhouse Paper Mill and the office of Christopher Sauer’s printing press — all local history.  His spirit will get him in trouble but it will also save him as he grows into a responsible young man.

My grandson, Eli, put this in the “to sell” pile of children’s books.  I’m not sure he’s read it.  Grandpop may put it into the reread pile before selling.  And it might be interesting to visit the Christopher Dock School and other sites in German Town.