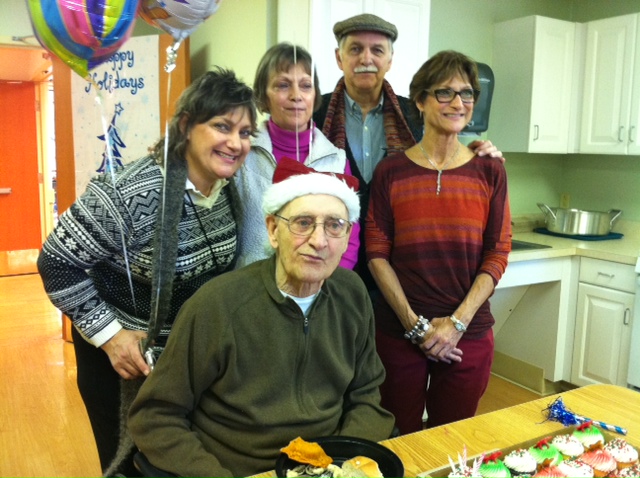 Facebook pages have been filled with tributes to fathers.  Some are recent college graduates with infants.  Older fathers being remembered by children or spouses. “You are the greatest . . . You taught me all I know . . . Thanks for always being there for me.”  Then there are tributes to senior fathers, grandfathers.  Some deceased, “You are always with me.” Photographs can be portraits, fathers and children, Mom and Dad, family groups.

Looking at the posts, made me pause and think about my Father.  Not Dad, Daddy,Pop, he was always Father.  Even some adult friends referred to him as Father.  I suspect he was the first of their post War group to have a child — a boy, a son, me.

My memories of Father are many random incidents that define his beliefs and character.

It’s Friday night.  Father is in Thomas Profy and Sons, GE appliance store.  An older Italian woman approaches, “Mr. Profy, I bought my refrigerator from your father thirty years ago.  I want to buy a new one.”  My father smiled, Mrs. C, I want to warn you, the new one won’t last 30 years. They don’t make them as well today.  I smiled, I’d recently read Vance Packard and discovered the phrase “planned obsolescence.”

Another night a couple was looking at several washing machine models.  From the basic stripped down model to the top of the line with many additional buttons, dials, features.  The woman hesitated, should she get the top of the ine.  Father spoke up.     “The basic model has the same motor, agitator, and washed clothes the same as the top of the line.  One big difference was the number of things that could break with all those extra features.” And repairs were expensive.  She choose the basic model.

There were always locals, street business men, friends who stopped in the store to chat.  “Mitchell,” my father asked, “how do you cut a dove tail?”  Mitchell went into a lengthy explaination.  When he left, I asked father, “Why did you ask him that, you know how to cut a dove tail”  Father looked at me, “It makes him feel good that I respect his knowledge and maybe I’ll learn something new.”

A lot of father’s time was related to work.  Weeks days from 7:30 to 5.  Several evenings a week and Saturday hours. Several times a month, Father, drove to Bridge street and took the El to Jeweler’s Row.  He was stocking his small watch and jewelry department in the appliance store (a concession from my grandfather I think to keep him in the business).  Whenever I could I went with him.  He made me feel important, “learning the ropes.”  But he also took the opportunity to expose me to the City.  The department stores.  Usually Horn & Hardart’s for lunch.  Then we headed to Independence Hall.  This was the 1950s, and the federal government was creating the National Park and restoring Indepedence Hall.  Father shared in my amazement as conservators carefully removed  over a dozen layers of paint to find the original color.  I was hooked — history, historic preservation, Philadelphia.

Father always supported reading and read to me when I was very young.  The first real book I remember was “Nobody’s Boy.”  It had been a gift from Aunt Lucy but at 5 years old I wasn’t going to read it alone.   It was the story of an orphan boy who eventually finds his family.  I loved the story. Father read it several times.  Another book he read was “Uncle Wiggily” short stories.  Oh how I waited for the conclusion which set the stage for the next story.  On our trips to Philadelphia, Father introduced me to Leary’s Book store.  A devoted reader in elementary school, I was in heaven. He showed me juvenile literature — Robinson Crusoe, Swiss Family, Jules Verne, the Hardy Boys.  I always came away with a book.

Father’s life revolved around family, work,  church, and hobbies.  Summer vacation was a  week at the Jersey shore, initially sharing a house with Uncle Frank and Aunt Ellen’s clan.  I remember one year father had the store truck filled with beach gear, playpen, crib, even an extra refrigerator.  A lot of effort for a week at the beach.  He’d take me flounder fishing although he really wasn’t a fisherman.  But I  should have the experience. He didn’t like driving either but discovered a trendy store in Rancocus.  I recall quite a few family trips looking at wrought iron hardware, candles and other “neo-colonial”  house wares.  Another South Jersey destination was Batso.  Colonial iron bog foundry.  The drive was about the same as a trip to LBI.  The kids should learn some history.

Although not overly adventurous, I was impressed when Father bought a small boat.  Twelve feet sticks in my mind, on a trailer, with a tiny outboard.  We putted around Burlington Island, sometimes stopping for a picnic.  At the time I knew father was out of his waters with the boat but admired his willingness to try something new.  Small steps.  In his childhood, kids swam across the river to the island.

In a similar way he supported my involvement in the Boy Scouts by signing up for camping trips.  Like boating and driving a car, camping would not have been a favored activity but he would support me in my interests.

He was a sports person.  Track and Field.  During the 1950s, he took me to the Penn Relays at University of Pennsylvania’s Franklin Field.  It was an exciting time for the mile race as runners attempted and did break the 4 minute mile.  I was especially fascinated by Ron Delaney from Villanova.  In fact Mom had once dated the team’s Doctor who took me to the locker room to meet Delaney.  Somehow I lost the signed program from that visit.

In high school I played basketball.  Father set up a  backboard in the parking lot behind our Mill street apartment.   Most weekends, he would join a group of local kids on the court.  He was in his early 40s and kept up with several starters from the Bristol HS team.  We soon learned that although short he jumped high for rebounds and you didn’t want to be hit with his swinging elbows.  I guess he attended some of my games but he was a player not a screaming fan in the bleachers.

Despite his aversion to driving, he took me to Boston College in our maroon Impala.  I remember his horror at Boston traffic.  This would not be something he would do regularly.  It seemed we found my off campus housing in Newton Square, unloaded the car, hugged goodby and my parents were gone.  If we went out to dinner that night I have no recollection. I had been raised to be independent.

My Freshman grades were mediocre. And  I refused to take some test to get a deferment.  In September I was back on campus and I got a induction letter.  I wrote the Bristol Draft Board explaining that I was registered and had paid for the first semester of my Sophomore year.  I got a deferment.  Decades later one of my sisters informed me the deferment was probably was granted since Father talked to someone, not because I wrote a letter.

Fast forward to the end of the school year.  Diane and I had become engaged.  I returned to Bristol in May with wedding plans for July.  Since I was only 20, I needed parental permission. One evening after dinner, Father announced that he wasn’t signing any papers, “I was too young to get married.”  The next morning, I packed a suitcase and hitch hiked back to Boston.  By July, Father had relented and we were married in late August. I asked him about his resistance.  He responded, “I was worried” he said, “how were you going to pay for college and support a wife.  I have nothing to give you.”  “That’s OK,” I said, “you could make us some furniture.”  Father had always done house repair carpentry.  He had tools.  Why not furniture making.

That Christmas, Father drove to Boston.  He was alone.  Mom had 4 daughters to care for.  In the Impala was a pine Cobbler’s Bench coffee table and a round, fold up, dining room table — the top could roll back making a seat.  He had taken my comment literally and began making furniture.  These would be the first of his many wood working projects.  Also squeezed into the car was a piece of green wall to wall carpet.  He laid it out in the living-dining room, measured cuts, marked on the back, and cut.  When he turned it over he went wild.  His cuts hadn’t accounted for the rug being upside down.  He was furious.  Always double check measurements he reminded me.

In 1976, Diane and I took a five week trip to Great Britan.  A house on Mulberry Street might be listed.  I told my father to make an offer, we would buy it.  When we returned he informed me that we had bought the house.  Although there had been no settlement or money involved, he was already doing some interior painting.  Problem was that Mom wasn’t talking to me.  One of my sisters explained that she felt that they should have bought the house.  I told my father to take it we could find something.  He  finally agreed but with the condition we move into the family apartment on Mill street.  We did and a year later with baby Jenny bought a house in Yardley.

Neither my father or his brothers were aggressive businessmen.  By the 1970s, suburban shopping centers and malls had drained Main Street business.  Thomas Profy and Sons GE appliances closed.  I got father a job as head of the maintenance department at HGP.  A decade or more later he retired from HGP.  The school hosted a party for Father and Eddie Beyer, a long time bus driver.  Although not a public speaker, Father agreed to say a few words.

He described how every morning he walked the halls unlocking classroom doors and turning on lights.  “I was proud,” he said. “I turned on the light, making it possible for those talented, smart teachers to teach their students.  I was contributing to their education.”  So perfectly, Father.

In his last years after Mom’s death and his increasingly fragile memory, Father remained smiling, with a twinkle in his eye, a subtle joke, and hugs for his children and grandchildren.

One thought on “Father”