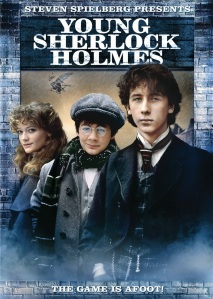 Several nights ago, Diane and I watched “The Young Sherlock Holmes.”  We immediately saw traces of Harry Potter — boarding school, precocious kid, male and female sidekicks, a bad teacher, magic and mystery.  It’s a 1985 movie, pre-Harry, but most reviewers don’t believe that Rowling borrowed; just archetypal elements.  There are scenes of an Egyptian death cult obviously owing a debt to Indiana Jones. “Raiders of the Lost Ark” came out in 1981 and Steven Spielberg was an advisor to “Young Sherlock.” Film history can be interesting.

“Young Sherlock” is one of about 500 DVDs I have been bringing upstairs from the many boxes I brought home from Holy Ghost Prep and stored in the basement.  My collection developed when I committed to watching the AFIs (American Film Institute) best 100 American films.  In about two years I watched all of them except for the Jazz Singer which wasn’t available on VHS or DVD.  Anyone who reviews the list may want to do some additions and subtractions (actually I think the AFI has updated the list) but they are all good films worth watching more than once. As I worked my way through the list, I decided to teach a film course at HGP.  So I burned most of the films on the list — the beginnings of my DVD collection.

My serious interest in cinema (as an art form) began while I was a student at Boston College.  I was not alone.   The 1960s witnessed Americans interest in film,  foreign films, art theatres and film schools in CA and NYC.   I regularly went to films at the Brattle (one of Boston’s art theatres — Bergman, Fillini, Antonioni.  You didn’t need to hear the Swedish, French, or Italian to know these weren’t American, Hollywood movies.

At the end of my Freshman year, driving home with my father,  I shared an idea that I might leave BC and apply to NYU.  “Why” my father asked, “your already in a college.”  He didn’t get the idea of majoring in film making.  Lucas, Scorsese, Coppola, Spielberg and many others from my generation were the first to attend college to learn film making. But I returned to BC and was satisfied to take several courses in film offered by the English Department (my major). 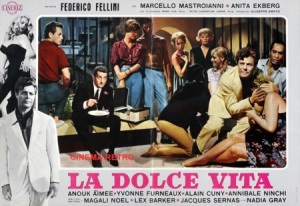 The instructor was Mannie Grossman, a new young addition to the department who was interested in film.  The courses offered were history and critique not production.  Mannie and I became good friends (both recently married), went out to dinner and the movies. A standing joke between us was who read (prepared more for class).  The courses introduced me to early cinema — French, German and Russian films.  I carried my interest into other courses, writing screenplays, reviewing Shakespearean films, comparing novels to filmed versions.  Most professors were quite open to these alternatives to traditional English papers. Books about film history, film as art, directors, genres flooded the market.  Few existed before the 1960s.

Minor production experience came outside of class.  At BC student activity funds became available to make films.  I applied and got money to shoot a documentary film  about the Harcourt Bindery  — a shop where I worked with machinery and employees straight out of the 19th century.  My film was shot with super 8mm; sound was on a separate reel to reel tape that had to be synced when shown.  There was only one public showing during a campus wide film festival.  But it’s basically impossible to blow up Super 8 to a theatre size.  Despite that, the film was well recieved (probably due to subject matter) and I thought I may have gotten an “A” in my seventeenth century prose course because the professor liked the film.

About 2 years ago, I sent “The Bindery” to a company to have it digitized.  Scan Digital lost the film.  I was shocked.  It’s worth mentioning, the retired teacher who bought Harcourt Bindery from my boss, Fred Young, made two documentary films with National Endowment money.  They are much more sophisticated than mine. But loss of “The Bindery” was unfortunate.

In Boston and the years right out of college, I continued to shoot film, instead of taking 35 mm photographs.  Most of it was just raw footage.  I few times I tried to tell a story.  When Diane and I were in the Peace Corps, I asked for funding and was given money to rent equipment and document our training program. PC made several copies.  Scan Digital didn’t lose this one and so I have a DVD but haven’t watched it yet.  Some time soon I need to go through my Super 8 footage and get more converted.

In the 1970s, I put down my movie camera (I’d bought a Bolieu) and started taking 35 mm photographs.  First with my father’s Argus; then with Canons purchased by HGP, finally with my own Nikon equipment.  For about 10 years I sent slides to stock companies and did a few yearbooks and weddings.  I still get an ocassional royalty check from images stock companies accepted over 40 years ago.  Unfortunately I stopped when administration and school work took up more of my time. Film was watching movies.

I never got very involved with a VHS camera.  I used one in class and gave students film making assignments, but I only brought the camera home one Christmas.  While Diane cooked dinner, Jenny and I made a PBS style home show.  I probably should get that on a DVD and also transfer several 16 mm films that Diane’s father made. One is of a car trip out west he made with a friend in the 1930s; another are clips of Diane growing up. More retirement projects.

I taught the film course at HGP for about 8 years.  The textbook by John Belton was used in many college classes was the basis of my course title,  “American Cinema/American Culture.”  For  the first month, we reviewed the early history of film, Edison, through “Birth of a Nation.”  Most students had never seen a silent film nor a black and white film.  On the first day of class I gave them a list of about 20 important American films.  Most had seen one or two — i.e. “The Godfather,” maybe “The Graduate.” 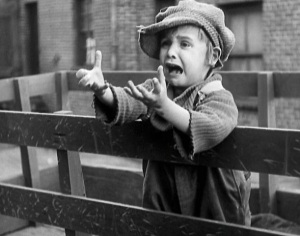 After Chaplin’s “The Kid'” we turned to comedy as a genre.  “Some Like it Hot” was always a big hit.  To my surprise “Doctor Strangelove” and “Mash” would get mixed reviews.  I enjoyed comparing Astaire-Rogers in “Swing Time” with “West Side Story” and Travalta in “Saturday Night Fever.” Students were also required to watch some films at home, keep a journal and write some formal reviews. For instance, “Tootsie” might be assigned after “Some Like it Hot.”

Although I changed films annually there were other regulars including “Mr Smith Goes to Washington,” “Rebel Without a Cause,” “Bonnie and Clyde,” “Fargo,” and of course “Casablanca.”  One year I had time for one last film.  “Milk” was getting a lot of press.  Quiet and hesitant in the beginning, particularly with the open homosexual scenes, almost every kid in the class was cheering for Harvey Milk by the end of the film.  I kept “Milk” on the list as the last film shown in the course.  It was a fun course to teach and I never minded rewatching classic films.

Recently I’ve been watching quite a few movies.  That term “movies,” by the way,  came about because the early film makers from NYC and NJ “moved around a lot when they moved to Hollywood.  Locals took to calling them “the movies.”  It wasn’t complimentary.  Just a bit of trivia from the film course.

I currently watch streaming on Amazon and our Comcast account.  Unfortunately there is an awful lot of junk.   Streaming Turner Classics  usually offers an older film that is new to me or some classic favorite. I watch a lot of PBS streaming — the American Experience and Masterpiece.  Diane borrows CDs from the Library.  Usually I can buy into her choices which run heavy into series like “Foyle’s War'” or “Call the Midwives.”  We get one Nexflix at a time — trying to see some current hits.  And every few weeks we go to the County Theatre in Doylestown or the Ritz in Society Hill — versions of the old art cinemas.  And now I have my 500 DVDS.

Maybe I need to find a pattern or purpose in my watching or maybe watching a good film enough.  Tonight I’m going to watch “Mr.Holmes.”  I just finished the book.  Holmes has retired, is raising bees, trying to understand life and old age.  Unfortunately I can’t have popcorn anymore.