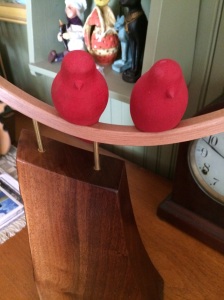 Several months ago, Diane and I went to the Tinicum Arts Festival.  It’s one of several annual craft shows we attend each year — the  Philadlphia Museum of Art Show at the Convention Center and the  Labor Day weekend Show at Long Park in Lancaster are others.  There are usually other shows, some sponsored by the  Pennsylvania Guild of Craftsmen, maybe at Tyler State Park.

Our interest in crafts date to the 1960s. In college, I worked at the Harcourt Bindery, one of the last leather, craft binderies in the country. When I graduated from Boston College, my boss, Fred Young wanted me to buy the bindery.  I looked around, many of the guys had been there for their entire lives.  I wasn’t ready to make that commitment.

At about the same time, I remember sitting at the kitchen table with my father and explaining how the “youth, hippie, craft culture” was being co-opted by mainstream stores. Beads and tie dye shirts were being sold in the malls.  I also remember taking my father to a craft show at the Philadelphia Armory. Although he was an amateur woodworker; he was blown away at the works and craftsmanship he saw at the show.

Back in Bristol after our Peace Corps experience, I applied for a job at the Moravian Tile Works.  Henry Mercer’s properties had been  given to Bucks County, and  the County was going to reopen the tile works.   I think I applied for a job but turned to teaching instead of crafts.  No to Harcourt bindery; no to Moravian Tile.  Was there a pattern?

When we lived in Bristol in the early 1970s, we  met Melody and Garrett Bonnnema.  Melody had been an art student at Pratt ( NYC)  with our new friend, Barbara Cantor Paglione; Garrett was a high school mathematics teacher.  They introduced us to the world of potters and people who were trying to make a living through crafts. In the  early 1970s, the Bonnemas moved to Bethel, Maine and opened a studio.  For a summer, about 1974, we crashed with them, learning something about pottery and a lot about the  craft movement. Diane threw some pots; I did a bit of carpentry.  We helped with craft shows from Rhinebeck, NY, to  Virginia Beach.

Over the years, it’s been hard for Diane and I to resist purchases. Baskets, pottery, glass. wood work,and  mixed media —  we enjoy and buy. One of our early annual craft shows was at  the Mercer Museum.  it was small but quality.  We probably bought some Pennsylvania redware. But most memorable was a basket we bought for $100.  A lot of money.  But I was amazed, several years later the same basket maker was only taking orders for baskets In the $1,000 range.

I’ve been back from the hospital three days, recuperating from  failed fistula surgery.  I am dealing with an exterior wound and interior wounds, two catheters and an ostomy.  Daily maintenance has become almost a full time job for Diane and me.  But as I sit and rest, how I enjoy the crafts and art we have bought over the years.  From my seat at the dining room table I can enjoy the large Noah’s Ark with Noah and ten pairs of animals, a Bonnema tile of a lake scene, two small Steve Tobin pieces — a mug and one of his explosions,  maybe I can look into the crater piece and see a magical world.  There is the small brown and white glazed castle that I liked because the castle lifts off the rock.   Never decided what to store inside. And a small Mercer tile of the Museum.

The large oval Steve Tobin bowl is filled with gourds. 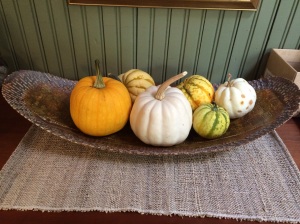 There is a shelf of redware plates, hiding behind pictures of the kids.  And small hanging shelves filled with carved animals — some of these were Ragna Hamilton’s.  The intricate and delicate  blue amphora like Irish vase that Diane found in a New Hpe Celtic shop, awaits some fresh flowers.

There is a carved Canadian Goose with its head gently curved around its neck.  Most fun is Jerry Alonzo’s “Three birds on a Wire.”  The birds are magnetized and Diane and I move them according to our feelings — close or give me some space. So happy to be enjoying our craft collection.  And I can move into other rooms.