I’d been after Diane to plan a short get away for a month.  Finally she booked two nights at The Falls Village Inn, Falls Village, Connecticut.  Her choice was influenced by a desire to pass through Carmel, NY — her hometown — to arrange for a date to be set in her mothers tombstone.  I decided on a serendipitous trip and had no real focus on Falls Village or the surrounding area.  We rode through Carmel and stopped at the Raymond Hill cemetery to arrange some work on her parents tombstone, then we started north on Connecticuit Route 7.

This was familiar territory.   In fact,  beginning our Honeymoon, the director ay after our wedding in Brewster, NY — one town over from Carmel — we headed north on 7.  Our first stop was a small park, Kent Falls.  Somewhere there is 8mm movie footage of Diane throwing her flowers into the stream beneath the falls. We didn’t stop since we took a few anniversary pictures at the falls several years ago.  What caught our attention, however, was the Sloane-Stanley Museum in Kent.  Eric Sloane was a painter, writer, pioneer america enthusiast and collector of early American tools. Diane and I both used his books in research and teaching.  Footnote, this may be an interesting stop on the drive home.

The next familiar stop is Cornwell Bridge along  the Housatonic River.  There is a small cluster of buildings around the covered bridge — CT has over two dozen.  One shop is the Cornwell Bridge Pottery (not opened on Thursday); another is Ian Ingersoll, cabinetmaker, furniture maker in the Shaker tradition. The last time we stopped we were very tempted to make a purchase.  But it’s getting late so we push on. 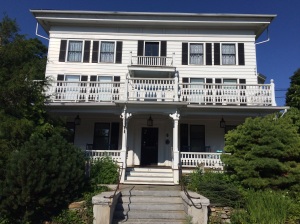 Falls Village is new territory. Our Inn is located on Railroad Street — “a mid nineteenth century station stop on the Housatonic Railroad.” We learn that the village grew due to the river falls which provided water power for industry and the Ames Iron works which produced cannon during the Civil War.  Today there is a large hydroelectric plant along the river near the falls. It’s not very attractive but it’s producing clean energy.  Our recently renovated Inn across from the Railroad Depot was built c 1840, has a large front porch and Italianate architecture. Other buildings in town reflect Greek Revival, Second Empire, and Queen Anne — all Victorian styles build during the late 1800s.  Interesting downtown Yardley has examples of all these styles, also built at the same time following railroad construction in Yardley.

Before dinner we take a walk, cross under the RR, attempting to find the river and the Applachian trail.  At a small parking lot, we meet a group of hikers who tell us a bridge is out and the AT had been detoured around town.  As we talk to other hikers we learn some are ignoring the detour and fording the river near the old bridge.  The hikers, twenty-thirty year olds, add a nice feel.   Our backpacking days (always limited) are over but we still enjoy the romance of  the trail — if only.

Back at the Inn we have some pre dinner wine and then dine on a side porch.  A baked Brie with almonds and apples  was delicious.  Local beer.  Salmon for Diane; tuna for me.  A berry dessert and Irish coffee.  Haven’t ordered one in years but perfect.  The inn is overpriced but dinner was very good and out server was delightful.  It always adds to a meal.  A few hikers show up for dinner (our waitress tells us they are sometimes turned away due to body odor).  One guy actually rents a room for the night.  At the Inn prices, he must have a generous patron.

Breakfast not included (very unusual for a B and B). But a block away is The Toymaker’s Cafe.  Run but a retired couple who open up their yard for camping AT hikers.  Not many tables, extremely eclectic decoration, books, magazines, posters and prints.  Several hikers sit at one table; a few locals at another.  Diane orders Eggs Benedict (high praise from a YELP reviewer); I have green eggs, a creative dish with avocado, lettuce and other veggies, Canadian bacon, fried eggs and pesto — sounds almost healthy.  We get into conversation with one hiker from Ohio.  He’s only doing 1/2 of the trail this year but has plans to finish Georgia to Harpers Ferry next year.  Also dreams of doing what he called the International AT — Nova Scotia, Greeland, Ireland, ending up in Spain and Portugal.  We’d never heard of it.  We’re happy to sell all the hikers with backpacks, worn boots, bandanas, walking sticks, water bottles, and sleeping bags. 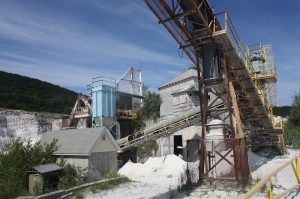 Brochures and a map let us know that in tourist promotion, we are in the Litchfield  Hills.  Since we have no definite plans, we decide on a loop of small towns north, east, south and back to Falls Village.  I punch Canaan, CT into the car GPS.  Just beginning to use this.  You must be stopped to enter a destination.  A bit annoying but safety.

Before reaching Canaan, we turn off a side road which should take us to Land of Nod Winery and Beckley Iron Furnace.  Before we find either, we stop at a limestone quarry.  I’m out of the car shooting pictures when a guy in hard  hat approaches, “Careful,” he warns ” if some of that falls on your head, your done.”  I learn that this is magnesium limestone for industrial use; a company quarry in MA mines calcium limestone for food and medicinal products. Further down the road was Beckley Iron Furnace, a small historic where pig iron was made.  The RR went through Canaan and there is a movement to save a large RR depot. In its nineteenth century heyday, there were 12 passenger trains daily; milk trains headed to NYC; and freight  includIng pig iron, nails, ships anchors and limestone. We continue our explore to Norfolk.

Each town on our route highlight a few tourist attractions.  In Norwalk it was music and books.  The Infinity Music Hall & Bistro was an interesting building; one of several music venues in town.  Next door was an old fire company building with several businesses.  In a quaint local craft shop, the owner suggested we visit the town library.  A beautiful building on a classie New England town commons, donated to the community by Isabelle Eldridge in 1888.  The exterior is stone and fish scale tiles.  They recently received a grant to restore the fluted Spanish roof tiles.  The interior wood, stained glass,  upholstered chairs.  Loaded with books and a few computers.  The library also hosts a variety of events — an upcoming a lecture on the Underground Railroad, and lantern slides of China.

We continued on to the small village of Goshen.  Most of the land, outside of these towns, is undeveloped forests.  Occasionally, we get a view of rolling hills, some farms, dairy and quite a few vineyards.  Maybe the limestone.  Goshen’s claim to fame was the fairgrounds (nothing happening) and Nodine’s smokehouse.  We stopped,  lots of smoked ham and bacon products.  Looked good but our ice chest wasn’t iced so we pushed on to Litchfield and lunch.

Litchfield was the biggest to the towns we visited.  A fairly active commercial center.  Unfortunately I chose a restaurant a bit outside of downtown, Saltwater Grill.  It was in a historic building, with nice outside seating but the food was just OK. The real annoyance was our young waitress.  I asked about local brews, “Oh, we have a lot.”  She proceeded to read off what amounted to standard national beers.  A few names I didn’t recognize, “Belevidere?”  She didn’t know if it was local but it was very good.  Turned out it was a  Blelvidere vodka drink (on tap?), not bad,  but obviously not the local beer I wanted.

White Flower Farm is in Litchfield.  We’ve ordered hosta from their catalog and Diane had been there with her mother once. Me stopped.  It’s not a big place but very tasteful.  Unlike Terrain (our go to garden center in Chester County), White Flower deals strictly in plants.  The most amazing was a green house filled with Blackmore and Langdon Tuberous Begonias.  They are only propagated in England and at White Flower Farm from cuttings.  Amazing display of colors.  Most not for sale, being grown for cuttings.  Diane picked out a few flowers; maybe we’ll start a new flower garden.

From Litchfield we headed back to our B and B in Falls Village.  We ate again at the Inn. Since we had a big lunch, I settled on a lobster roll — expensive, but tasty, and just enough.  Diane had a beet salad.  No dessert but couldn’t resist another Irish coffee.  The porch dining was relaxing.

We left early Saturday, headed to Kent.  A short detour took us through some nice countryside, AT hikers, and the village of Sharon.  Our destination was the Eric Sloane Museum in Kent.  Sloane was an artist, collector, and writer.  Most of his books deal with Americana, particularly, wood and early American tools.  As mentioned, Diane and I both drew on Sloane’s work in teaching — “A Reverance for Wood,” “Diary of an Early American Boy: Noah Blake,” “A Museum of Early American Tools,” are several titles we remember.  The books use a hand written type face that Sloane developed And detailed pictures of tools and other artifacts.  The Museum, funded originally by Stanley, contains rooms of tools that Sloane and Stanley collected and another room that recreates his studio.  He died in 1985.  I liked the way the interpretative text was actually written by Sloane in his distinctive style and pages from his books  were placed with the display.

The old tools struck me on several levels.  I recently went through a lot of my father’s hand tools. And on the slave cabin building project at Montpelier in February we used some of the tools — broadax, froe, for example.  And then I was reminded of Henry Chapman Mercer and his “Tools of a Nation Maker,” and the Mercer Museum.  Sloane knew of  Mercer and had a copy of Mercer’s “Ancient Carpenter’s Tools.”  We talked to a woman in the museum and she located an old  VHS program, Roy Underhill’s “The Woodwright’s Shop: Two Old Tool Pioneers.”  The program featured Sloane and Mercer. Fantastic.

Amazing but we found another Bucks County connection.  On the drive up, we had  spotted a Steve Tobin black Steel Root sculpture in front of the Starbuck Inn in Kent.  Someone in a liquor store told us there were others.  Now in town, we saw Steve Tobin Steel Roots all over.  There were over six. And in a field beside the Farmers Market was a huge  deconstructed root laying in the grass.  We found out that the Morrison Gallery in Kent representes Steve and were hosting an exhibit.  Unfortunately time constraints and we didn’t view the exhibit but it was neat seeing Tobin’s work in a context.  A bit of Bucks County in Connecticuit.

Lunch in Kent — Mexican — and we headed home — a little over 3 hours with delays on the Tappen Zee bridge.  But we got to the kennel on time to get cat and dog.  Didn’t want to pay for the weekend. 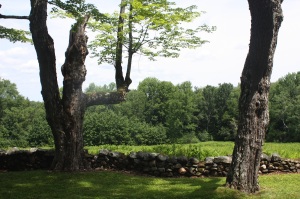 Our trip, exploring the Litchfield hills, a bit of serendipity; some familiar, some new.