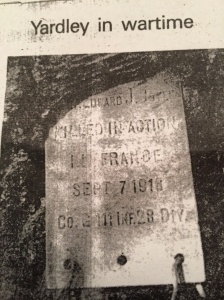 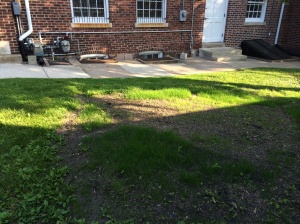 On my walk around Yardley Borough this morning, I was jolted when I saw a large tree to the right of Borough Hall had been removed.  The tree was planted after WW I  to honor Edward Doyle,  killed in the war.  About eye level in the tree was a small metal  tag with Edward’s name.  A identical tree on the left side of Borough Hall had been removed many years ago.  It honored the second local killed In the war — Miriam Knowles.  Both their names are on a plaque on Borough Hall and guess what the local American Legion Post is named– Knowles-Doyle.

As far as I know, no one involved with the tree removal  knew about the tag.  Not surprising since we pass traces of history every day, all day and never notice.   I am not being critical, I do the same thing.  But unfortunately we miss the opportunity to be in touch with our past.  And remember its the past that got us to the present.  I learned about the  trees and the tags when I began reading the minutes of Yardley Borough Council meetings.  I rushed to look at the  trees and tags  and found Doyle’s.   I had walked passed that tree hundreds of times and never noticed.

My first  exposure and interest in local history was growing up in Bristol Borough.  Sometime — seventh grade, freshman year in high school — I  discovered two books by Doron Green in the old Bristol library.  The first was a general History of Bristol.  The second totally intrigued me — Old Homes  on Radcliffe Street.  I walked passed the homes regularly, now aware of  who lived there in the past; some of my friends lived in the homes.  This was pretty neat.

Around the the same time my father took me to Independence Hall in Philadlephia.  He had a small jewelry section in the family GE appliance store on Mill Street.   Weekly he traveled to Jeweler’s Row.   I loved the gilt painted names on the windows and the old oak cabinets with many drawers filled with watch and clock parts (unfortunately like Edward’s tag, most of that is gone today.)

The highlight of these trips (along with taking the El from Bridge Street) was our weekly visits (in the summer for me) to Independence Hall.  This was the late 1950s and the federal government had just taken over the responsibility for this iconic building. What blew my mind was the display of how the restorers were peeling away the layers of paint to determine the original color.  I think there were 18 layers of paint.  Wow.   I was hooked.

And so in the 1950s, local history, historic restoration and preservation became another layer to who I am today. Pentimento.

About 10 years later at Holy Ghost Prep,  I began to turn to local history when I taught a  course titled American Studies, later  Local Studies.   The course jelled  when I participated in a National Endowment for the Arts program in Local History at the University of Pennsylvania.  Walter Licht, the program director, lead us down a path that involved New Social History (common people and everyday life) and local history  (in this situation Philadelphia).  Every day for  a month I took a train into the City, walked to Penn, exploring the City and took photographs.  The program transformed the way I would teach Local Studies at HGP.   Now students would explore their own communities or neighborhoods — using primary as well as secondary sources, field trips, photographs and maps (historic and current), interviews.  Some students did excellent research, in fact, I only recently threw out a some papers and projects. — returning a  few to their authors.  Those in the class will remember my admonishment on field trips (at least two per class, take note current HGP administration)  look up, look down, look for the traces of history all around you.

In the 1980s, my fascination with Local History took a curious turn — looking around the corner maybe.  I was on Yardley Borough Council and one night at a council meeting I asked if anyone had read the old minute books stored in a safe on the second floor.  I began to read the minutes — handwritten beginning in 1896 — the year Yardley was incorporated.  The minute books lead to turn-of-the-century newspapers at Spruance library, photographs and other material at the Yardley Historical Association, walks around town, interviews, and eventually minute books from the School District,  Fire Company, WCTU,  and a variety of other sources.  I began to publish the results of my research in the Yardley News (thanks Jeff) approaching and during the Borough’s centennial.  A few year s later I published an Arcadia Press book on Yardley, I had earned the title of Yardley historian in local papers.  Cute.Teachers can go stale.  Notes and handouts yellow. Lectures sound canned.   For a number of years, I stopped teaching my Local Studies course at HGP.  Recently I returned and  taught a few sections.  As In the past,  some students had or  caught the bug.  They  did interesting, meaningful search; others (like most of us) didn’t see the value in Edward’s tag.

For much of my life Local History has informed my vision of the world.  As I peel away the layers of who I am and seek new directions, I suspect I will continue to look up, look down, and look around at all the traces of history that surround me.  I encourage you to do the same.

If the tree service still has the logs, see if Marian’s tag is there.